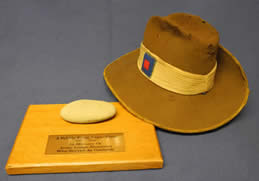 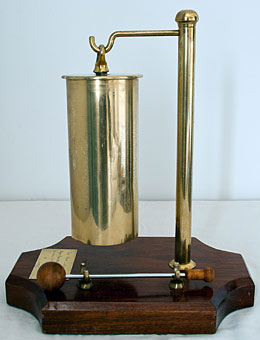 Gong made from a
Battle of Alamein shell case

ABOUT THE ARMY LODGE

The dual interest in Freemasonry and the Australian Army provides a double bond for members of The Army Lodge.

The military connection becomes apparent initially from the presence of military uniforms worn at meetings by those entitled to wear them. Other reminders of the army come from such items as the Italian Officer's sword, captured at Benghazi during the African campaign of 1940-41, the gong made from a shell case from the Battle of Alamein, and a pebble from the beach at Gallipoli and a battered slouch hat which mark the vacant place at the dinner table reminding members of those who have gone before.

The Ceremony of Remembrance performed each November has been used since the inception of The Army Lodge and is peculiar to it.

It is at the dinner at the end of each meeting, the South, that army customs are most evident. The dinner is conducted along the lines of an officers' mess. The port is passed and the Loyal Toast is honoured in the manner observed in a mess. Special toasts are honoured with the Army Fire or Cavalry Charge, a ceremony thought to have had its origins in British Army units on India's north-west frontier in the first half of the 20th Century.

The "taking of wine" is another custom peculiar to The Army Lodge.

While military rank is used at times, it is the equality observed within the Lodge which surprises many people. Members mix and socialise with no regard for military rank, the only criteria being brotherhood within Freemasonry.

Membership enquiries are welcome and can be directed to the Secretary or Master.